WORD FROM OUR REVEREND MOTHER 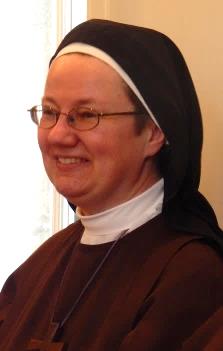 Dear Friends,
I spent some time as I thought about these notes trying to find an alternative to ‘we live in unprecedented times’! We do, but it is becoming a rather over-used term with the current situation bringing to a head a number of different issues in our modern times. Perhaps, instead, the best place to start is with Scripture and the reminder of God’s over-arching promises.

This verse sprang out as me as Lamentations was read as part of our Office in Holy Week. The Book of Lamentations has of course been associated with the liturgy for Holy Week over many hundreds of years. The desperate lament over Jerusalem fallen to her enemies and of its people enduring famine and violence, gives voice to the despair of peoples and nations over the centuries. The book gives permission and shape to grieving, not just for the Church but also for the Jewish people who read it in Synagogue on the ninth day of the Hebrew Month Av (July or August), the commemoration of the anniversary of the destruction of the Temple. It easily fits with the events of Good Friday. Yet in the midst of this vivid lament comes a passage of sheer trust in God. It is worth exploring this in the light of the current crisis.

Before I do that, I will pass on some Community news from the past months. First, I must let you know with great sadness of the death of our Sister Elizabeth of the Word of God Incarnate who died on January 3rd having been diagnosed with cancer only four months before. Sister Elizabeth was a New Zealander, and after her diagnosis was able to travel back there to be with family for a final visit. We had the privilege of being able to host her brother Phil, who arrived shortly after her death and stayed for her funeral.

Without a chapel available in the Convent we had to do things rather differently from our usual customs for a funeral and we were very grateful to Fr Darren McFarland and St Andrew’s Church, Headington, who hosted us for the funeral and the buffet lunch following. Sister Elizabeth had been Choir Mistress and had actually prepared her funeral service well before receiving her diagnosis; Sister Judith made the final adjustments and the result, I think, would have been very much appreciated by Sister Elizabeth. The homily preached at the funeral is in this Chronicle.

Even before our world was abruptly changed by the COVID-19 virus the Community was entering a time of change and disruption. When last I wrote we were looking towards moving out of the Convent, ready for the building work to commence. We are now living in five rented properties (four houses and a flat), and our own properties on Fairacres Road and Parker Street. Our staff are largely based in St Michael’s.

Our temporary Chapel is the former workroom in St Michael’s, smartened up by being decorated and having its wooden floor sanded and re-polished. It is rather smaller than we are used to, but seems to work well, and we were able to have Sr Elizabeth’s coffin here overnight before the funeral.

Until social distancing was introduced, we met each day for the Eucharist and we were eating lunch together daily at 76 Fairacres Road, which we were also using as a meeting place for the Community. Other offices and meals were held in our own houses, though there was a fair amount of sharing of worship and meals in the various places. This was especially true at Christmas when small groups of Sisters met to cook and eat Christmas dinner together, an occasion which seemed to be enjoyed by all.

One of the first events to be held in the temporary Chapel was the reception into First Promises of Oblate Sister Helen Margaret of the Divine Compassion  on the feast of Candlemas, and we are glad to welcome her as an Oblate Sister of SLG. Sadly our Oblate Sister Kitty of the Transfiguration (Kitty Platt) died later in the year, on 19 April, having been an Oblate since 1987. Oblate Kitty was a permanent deacon, and Oblate Maureen Hilary remembers that:

The ordination of women began while Kitty was still in London but she decided to remain a deacon as she was near retirement age. She had been the first woman trained at Westcott house when Bishop Mark Santer was principal. In Kensington she was in charge of Women’s Ministry …she was a much respected person in her ministerial life before dementia took over quite young.

COVID-19 and social distancing brought a new level of change and disruption to us all. Since the end of March we have been unable to meet, worship or eat together and, like all of you, our celebration of Holy Week and Easter was quite unlike anything we might have imagined ever experiencing. Again, like many of you, a lot of Sisters have turned to live-streaming of worship now that we are unable to meet for the Eucharist. We are all probably rather better than we were on various platforms like Zoom and Microsoft Teams, having been on a steep learning curve!

Since lockdown began each individual house and group of Sisters has developed its own rhythm of prayer, office and meals. Some Sisters regularly watch a live-streamed Eucharist from different places including the Community of the Resurrection, Mirfield and St Mary’s Church Iffley (one of our local parish churches) and each house fits a period of intercession into one of the offices during the day. I think you would find it all recognizably SLG, despite differences reflecting the circumstances in which we find ourselves.

Fortunately, it has been possible for our building work to continue, though with some disruption and delays. The builders have been able to maintain social distancing and, with some adaptions because of sub-contractors who are not working and suppliers who have been unable to supply products, they are continuing the building. At present that appears mainly to involve demolition, the stripping of the inside of the building and digging very large holes! It has been quite difficult for Sisters to see familiar bits of our building disappearing; one of our rented properties has a good view into the garden and we can see what is happening. Andrew, our maintenance man has access on site and has been taking photos of the progress; some of his pictures are shown here.

Thanks to the kindness of one of our neighbours we still have access to the Convent garden via a gate put into his garden fence. That means Mark, our gardener, has been able to continue tending the garden, the beekeepers have been able to visit the hives, and some of us have been able to walk in the garden which, despite some areas being fenced off, continues to look very beautiful. 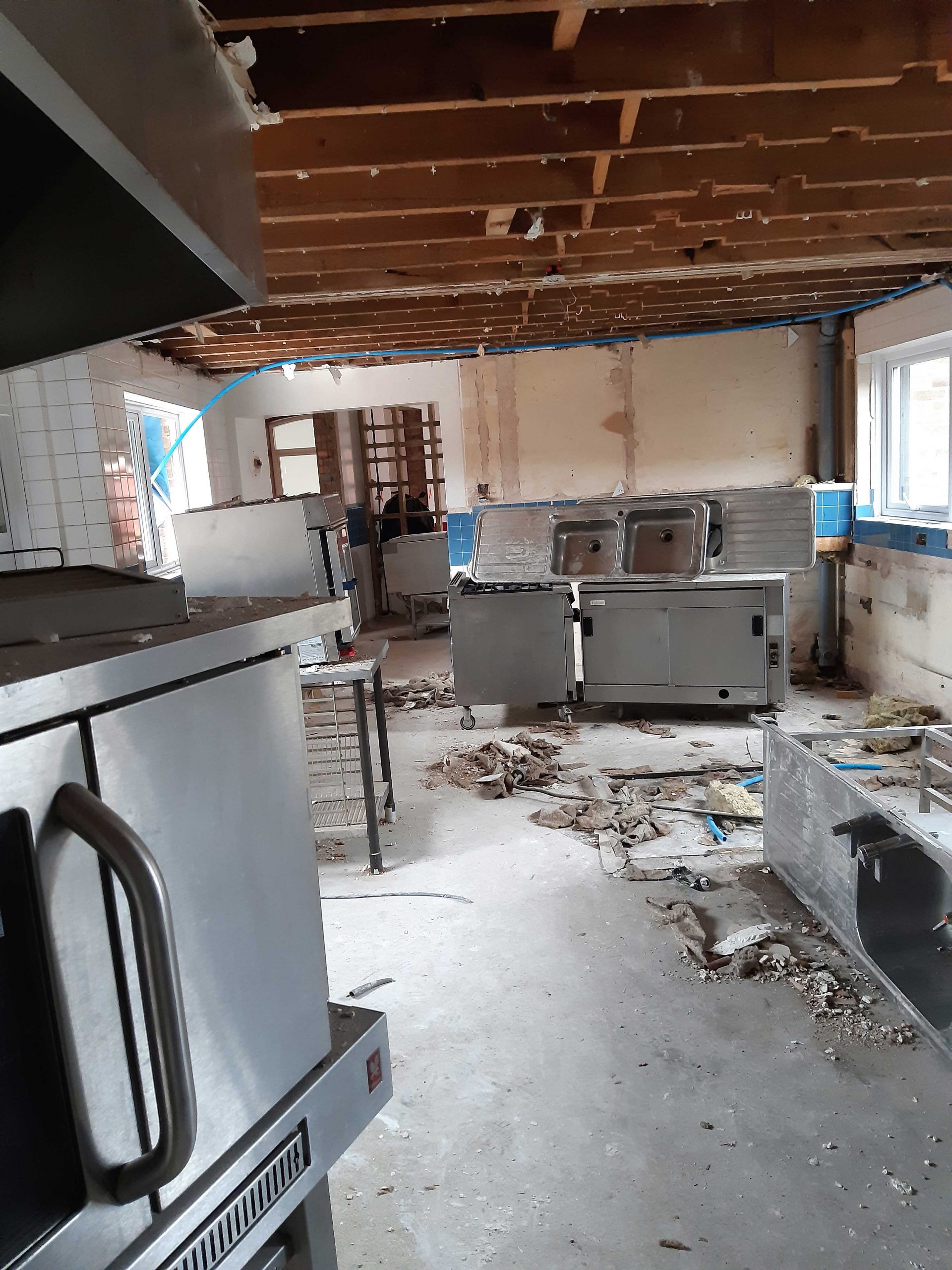 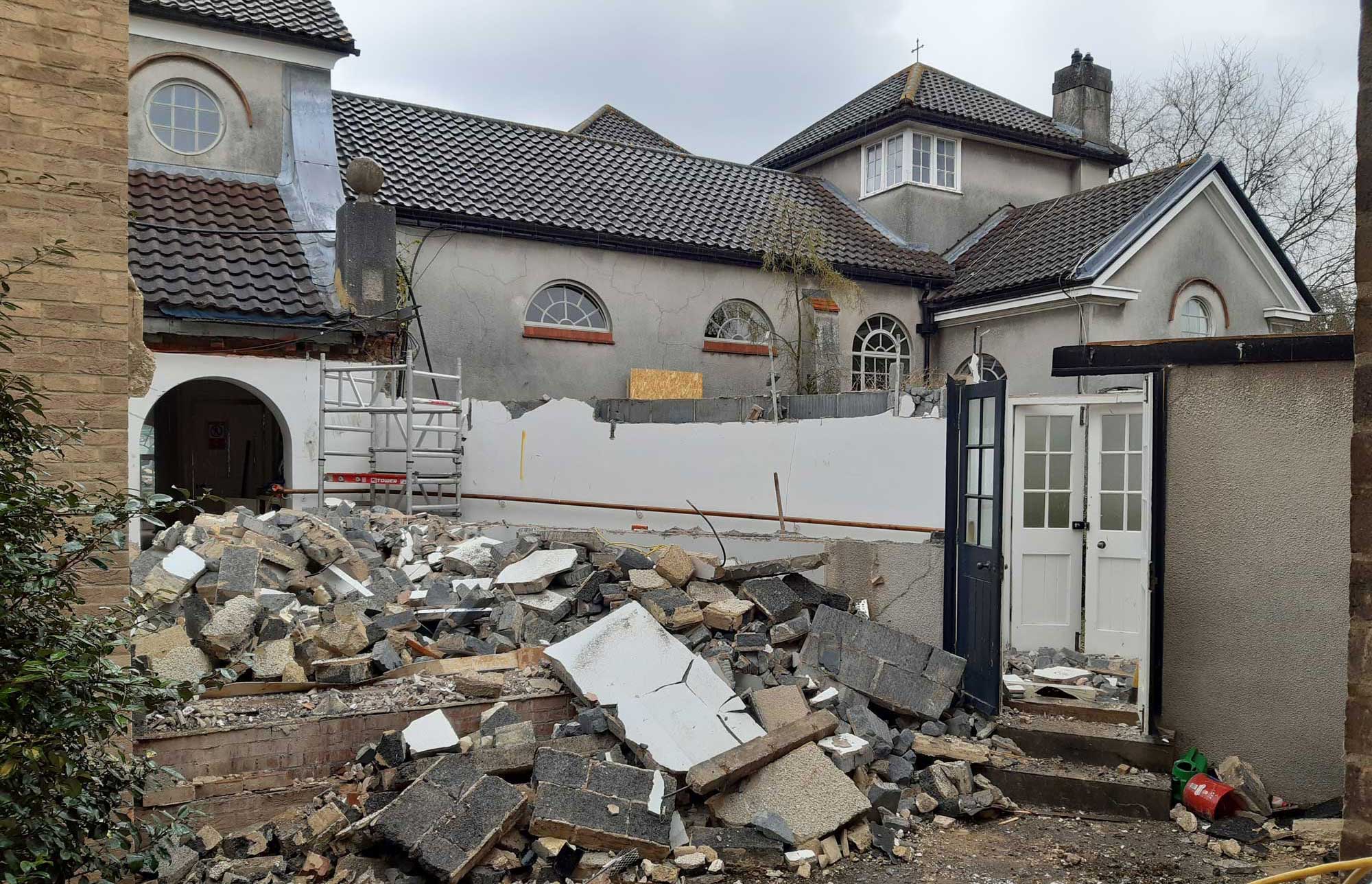 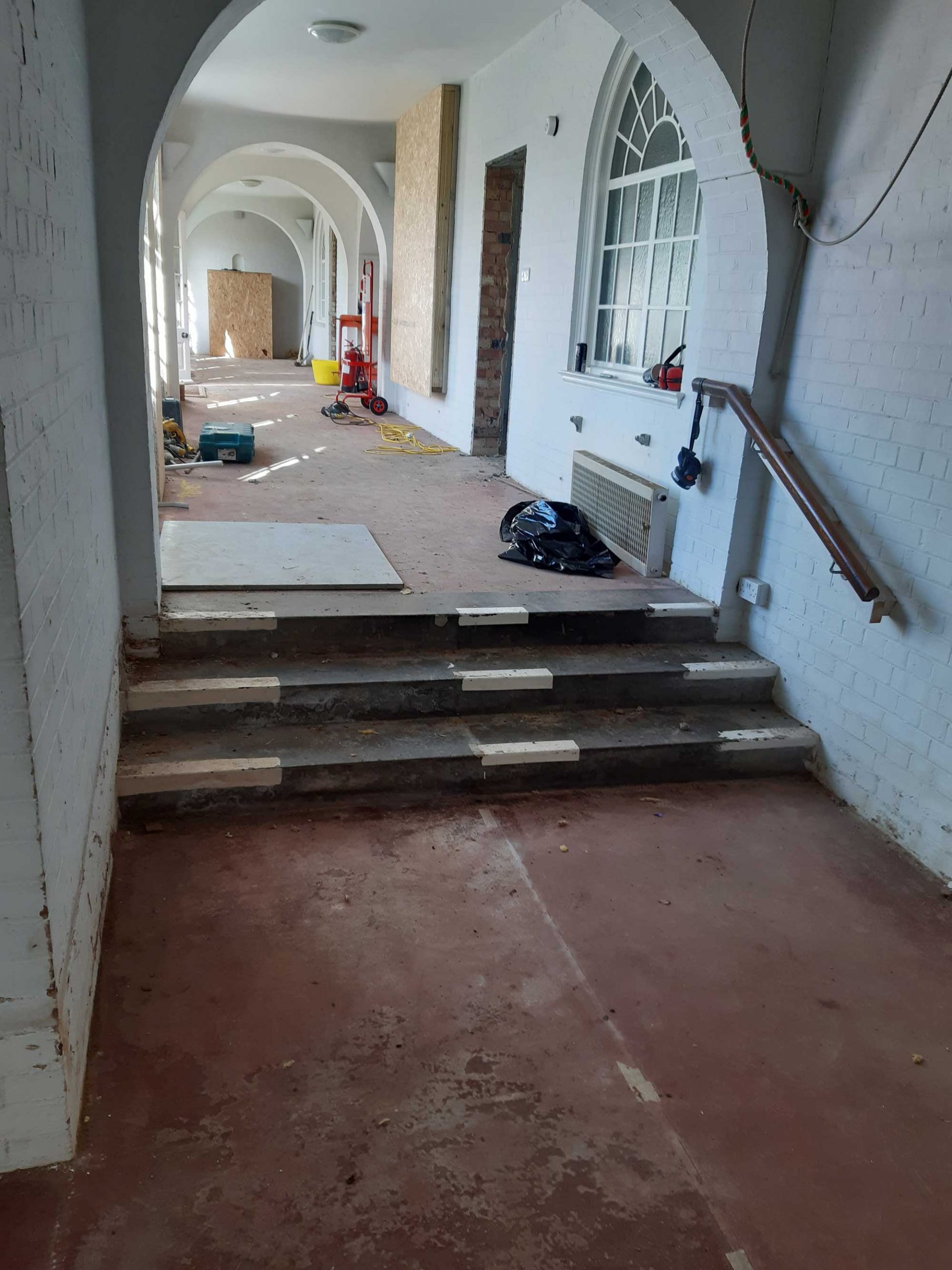 One big decision that the Community has had to make is to postpone the election for a Reverend Mother which was due to take place on June 1st this year. The logistics of holding an election while maintaining social distancing would be tricky at the moment. Instead I will continue in Office and in mid-September we will reschedule a date for an election, hoping that by then we will have more clarity about ongoing lockdown or social distancing measures.

So, back to Lamentations and its promise that the mercy and steadfast love of the Lord never fail. Remember that the writer of Lamentations puts this passage at the heart of a writing that pulls no punches in describing the reality of his situation. To give just a flavour of the text:

My eyes are spent with weeping; my stomach churns;
my bile is poured out on the ground because of the destruction of my people,
because infants and babes faint in the streets of the city.          (Lamentations 2:11)

Reading this, many of us may realise that, given what some experience, we are probably no more than mildly inconvenienced by coronavirus. However, while we give thanks for the blessings of life and safety that we have, that doesn’t mean that the suffering caused is not real, nor that the anxiety caused is any less valid.

Many of our usual routines, habits and supports have been taken away; who would have imagined that we would be unable to gather to worship together because of a virus, or that shopping, going out and meeting would all be curtailed? And we worry how long this will last and what changes it will bring to our lives in the future. What will the long-term economic effects be? Perhaps most fundamentally, we have been shown that there are things which the best of human effort cannot control; we are not masters of the universe.

Into all that, Lamentations 3:21–4 brings a Gospel (good news) message of hope. The steadfast love of the Lord never fails; truly, His mercies never come to an end. A frightened writer observing a ruined and devastated city could write those words and add, ‘the Lord is my portion, says my soul, therefore will I hope in Him’.

In the light of that faithfulness, what can we learn, practice and pass on? Many of us will have been challenged by our changed circumstances but will also have taken the opportunity to reflect on our lives in that light. I know I have found myself more grateful, less likely to take for granted things like the beauty of our garden or the opportunity to go for a walk. I am grateful that the daily routine of our life can continue to structure the day, that habits of prayer built up over the years can provide support when the outer props disappear. Though we couldn’t hold our Easter Vigil together in one place, I was moved by the ways Sisters managed to keep Holy Week and Easter nevertheless, constructing simple liturgies, lighting candles and dwelling in the Word of God. I look forward to being able to worship together again, but I also appreciate all that the silence, space and insights our pared-down liturgy have offered.

Just like our experience of having to move out of our buildings and seeing parts of them disappear, the current situation reminds me that God isn’t dependent on the externals to do His Will and manifest His Love. Things we took to be essential may not be; other ways of doing things may well be just as real. While we will have a long path ahead of us as the country, and the world, seek economic recovery, and most of all, as we show genuine concern and support for those who have truly suffered personally and financially during this time, we also need to look to the truth that His steadfast love never ceases as the real solution, not just to the COVID crisis, but to all the other issues that trouble our world whether they be economic, social or ecological.

A lot is being said about a new normal; quite what that normal will be is as yet unclear. However, as we turn to God, an underlying truth continues to sustain us:

But this I call to mind, and therefore I have hope: The steadfast love of the Lord never ceases, His mercies never come to an end; they are new every morning; great is your faithfulness. “The Lord is my portion,” says my soul, “therefore I will hope in Him.”

The Sisters join me in prayer for all of you, and thank you for your prayers for us.